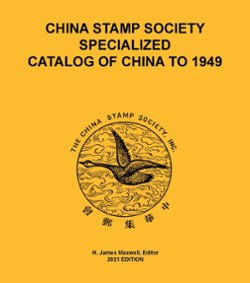 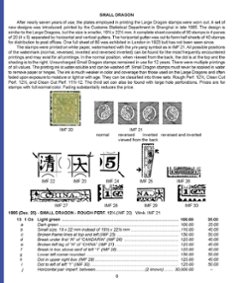 IT CONTAINS OVER 1,000 PRICE CHANGES, CORRECTIONS AND ADDITIONAL LISTINGS

It is a 520-pages, full color, comprehensive, specialized listing for the Imperial issues of 1878 through the Republic issues of 1949. Although originally built upon the Ma Catalog, it goes much further with thousands of specialized listings of varieties and previously unlisted stamps.
In addition, much historical and explanatory text has been added to tell the “who, what, when, where, and why” information so meaningful to an understanding of the material. Rate tables are included to give meaning to the changing face values of stamps during the inflationary period of the Pacific War and the post-War years.
It has a section on Non-Stamps with listings of the Imperial and Republic Official Postal Seals (1899-1948) and the Postal Savings stamps (1919-44).
The Preface includes an explanation of the presentation to guide collectors in the use of the catalog. It also includes a Glossary of terms and abbreviations used and tables showing the relevant Chinese characters. The Appendix includes an  Overprint and Surcharge Identification Guide, an extensive Bibliography of other publications cited, and a Cross-Reference to additional material in Chiu’s Supplement (available from CSS on DVD).
Imperial Issues (1878-1911) includes the Large and Small Dragons (1878-88), the Empress Dowager Commemoratives (1894-97), the Small and Large Figure Surcharges (1897), the Red Revenue Surcharges (1897), the Lithographed Imperial Chinese Post (1897), and the Chinese Imperial Post (1898-1910).
There are sections on the Early Republic Issues (1912-36), the Wartime Issues (1937-45), and the Inflationary Period Issues (Chinese National Currency issues of 1945-48, Gold Yuan issues of 1948-49, and Silver Yuan issues of 1949).
Special Purpose Issues includes the Airmails (1921-49), Domestic Express and Registered Mail stamps (1905-42), Postage Dues (1904-49), Parcel Post stamps (1945-49), Military Post stamps (1942-48), the British Railway Administration stamp (1901), and Stamp Booklets (1917-36).
Province Issues include Kirin & Heilungkiang (1927-29), Kwangsi and Kweichow (1925), Northeastern Provinces (1946-48), Sinkiang (1915-45), Szechwan (1933), Taiwan (1945-50), Tibet (1911), and Yunnan (1926-32).
The Japanese Occupation section includes maps, historical information, and introductory material on the stamps and the papers used. It includes the Hopei and Shantung Provincial Overprints (1941); the Small and Large Character District Overprints of Honan, Hopei, Mengkiang, Shansi, Shantung, and Supeh (1941); the Commemoratives on Small and Large Character District Overprints (1942); the North China Surcharges, Overprints and Commemoratives (1942-45); the Mengkiang Surcharges, Overprints and Commemoratives (1942-45); the Central China issues (1943-45); and the South China issues (1942-45).
The stamps of Manchukuo (1932-45) and the Official Postal Seals of Manchukuo. 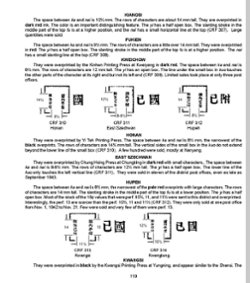 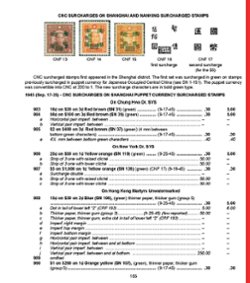 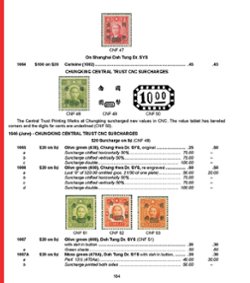 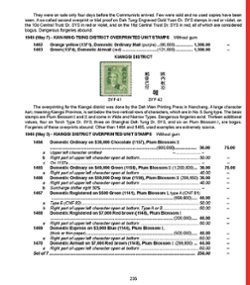