1933 DGP Postal Atlas of China in English and Chinese 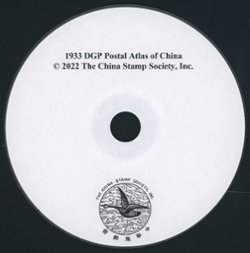 
In PDF and Expandable TIFF format (scanned at a very high resolution so that you can easily enlarge them with your computer and zoom in on the details).  The Directorate General of Posts (DGP) prepared these maps for use by its post offices.  Accordingly, on the maps and in the indices, the designations of cities and towns are based upon their postal hierarchy (i.e., district offices, 1st, 2nd, or 3rd class post offices, and agencies).  In other words, all cities and towns with at least a 3rd class post office are designated in both English and Chinese, while postal agencies (shown as open circles) are designated in Chinese.  Telegraph offices are shown with a red “T.”  Outlines of provinces are in red; outlines of postal districts are in red dotted lines; major highways are in green; and railroads are in black.  Bodies of water and rivers are in blue.

Post office delivery routes are shown as straight lines rather than following the actual roads or rail lines.  Distances between points are in Chinese li (about 1/3 of a mile).  Steamer and boat routes and distances are also shown.  The table below explains the frequency of scheduled deliveries.  Air routes are not yet shown.